Nothing is worse than stepping into your shower and only getting a drizzle of water instead of a steady stream. It’s a terrible way to start the morning. Thankfully, you can easily clean your shower head using simple household products such as baking soda and vinegar.

Read on and we’ll discuss how to clean a shower head so you can enjoy a hot shower that steams up your bathroom glass every morning.

How to Clean a Shower Head with Vinegar

Why Do Shower Heads Get Clogged?

Eventually you will need to clean your shower head to remove the scaly buildup and restore the strength of the flow.

How to Clean a Shower Head With Vinegar and Baking Soda

The best way to clean a shower head is with baking soda and vinegar. You can use this method for deep cleaning a shower head every month. It works for both stationary heads on a shower arm and handheld shower heads.

If you prefer, you can substitute the white vinegar with apple cider vinegar. It will also remove the hard water buildup and remove any clogs.

Cleaning your shower head with vinegar and baking soda is great to do once a month as part of a deep bathroom cleaning routine.

Remove your shower head by twisting it clockwise until it comes off. You may need to unscrew the nut at the shower arm using a wrench. Place a rag between the wrench and the nut to prevent scratching your fixtures.

Hold your shower head upside down underneath the bathroom faucet. Run water through the faucet so that any loosened debris inside the head is flushed out. Use a toothbrush and vinegar to scrub your shower head and loosen any debris still inside of it.

Use a toothpick or safety pin to carefully remove any other mineral deposits from the nozzle.

Fill a container with vinegar and add a few tablespoons of baking soda to the vinegar. Then, place your shower head into the vinegar making sure that it’s completely immersed. Allow the shower head to soak overnight.

You will need to wrap new plumbing tape around the threads to make sure you have a good seal. Then reattach the shower head using the wrench. Remember to use a soft rag between the wrench and your fixture to prevent any scratches.

How to Clean a Shower Head Without Removing It

If your shower head isn’t very clogged, you can use this method to clean the shower head without needing to remove it.

Apply the all-purpose bathroom cleaner onto the nozzle of your shower head. Use the brush or toothbrush to scrub at the shower head to remove any mineral deposits. Be careful not to scrub too hard as you may damage any rubber on your shower head.

This should unclog your shower head nozzle. Make sure by turning on the shower to test the spray. If you still need to decalcify your shower head, continue to the following steps.

Take the rubber band and put it on your shower head. Loop it once or twice so it’s tight on the water pipe without much give. You will use this rubber band to keep a plastic bag full of vinegar over the shower head.

Fill the plastic bag with white vinegar before placing it over the shower head. Then slip the top edge of the bag underneath the rubber band so that the bag is firmly held in place.

Leave the bag in place for 1 hour.

Once the hour is over, rinse the shower head by turning on the water to flush it. Use a dry microfiber cloth to polish it.

How to Clean Shower Head Without Vinegar

If you’d like to avoid the nasty smell of vinegar, you can use a shower head cleaner such as Nuvera Shower Head Cleaner to clean your shower head. Simply follow the instructions on the bottle.

Another option is to use a DIY solution such as baking soda, Coca-Cola, or Castile Liquid Soap.

One DIY cleaning solution is to make a baking soda paste by adding a small amount of water to ½ cup of baking soda. Cover the shower head with the paste and then wait 25-30 minutes. Use a microfiber cloth to wipe the paste off of your shower head.

Turn on your shower to remove any paste and residue which may still be in the nozzle.

Then use a microfiber cloth to wipe down and clean the shower head. Turn on the shower to make sure that any leftover residue has been removed.

How Long Should You Soak Your Shower Head In Vinegar?

If your shower head is extremely clogged, it may take over a day for the deposits to dissolve in vinegar. Usually, you can allow the shower head to soak for several hours or overnight and then test the spray.

How Do You Clean a Moldy Shower Head?

One way to clean a moldy shower head is to use a 1:1 ratio of white vinegar and water. You can place the solution in a container, remove your shower head, and allow your shower head to soak overnight. The mold will be removed.

Should I Install a Water Softener?

Yes, installing a water softener in your house will help prevent hard water minerals from leaving deposits in your shower head causing it to clog. 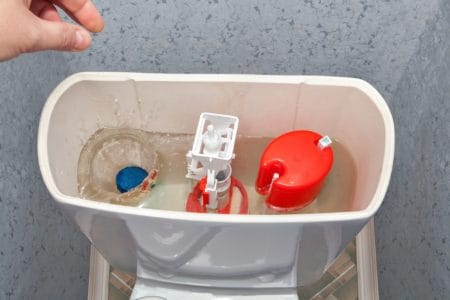 How to Clean a Toilet Tank (Make the Tank Pristine) 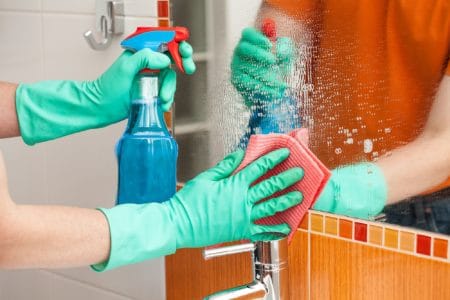 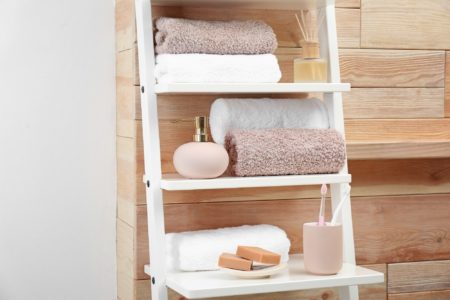 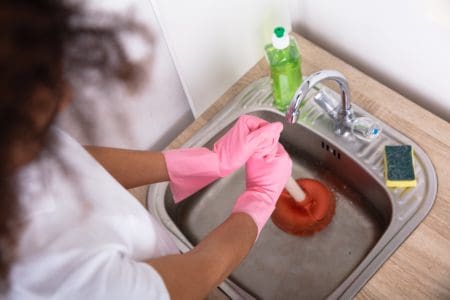 How to Unclog a Drain 9 Different Ways 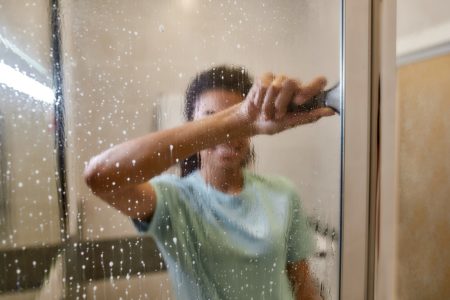 How to Remove Hard Water Stains From Shower Doors 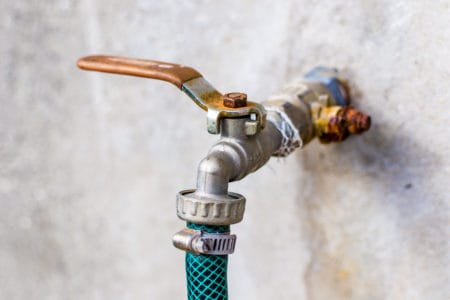